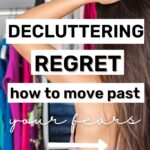 Inside: Use these tips to move past your fears of decluttering regret so you can make more progress with simplifying your space.

Are you sick and tired of being constantly surrounded by clutter – and yet struggle to make any meaningful progress around clearing it out?

But why is it so difficult to declutter? What’s holding us back?

Many of us avoid the act of decluttering because of the potential for fear and regret. The thought that you might actually need that stuff once you get rid of it, or you’ll miss it too much to justify, can leave us feeling stuck and at a loss for what to do.

But as challenging as it might seem, it’s important to overcome these feelings of decluttering regret so you can move forward and make meaningful progress.

Ultimately, there are lots of benefits that come with living with less – and you’ll only realize them by overcoming the challenges you face around decluttering your space.

Why Do We Experience Decluttering Regret?

I regularly see comments on my Facebook posts with people saying something like ‘as soon as I declutter something, I need it the next day!’. If that resonates and you also struggle with the idea of decluttering regret, you definitely aren’t alone.

Many people want to clear the clutter out of their space – but the thought of potentially regretting the decision to say goodbye to things leaves them paralyzed, unable to take action and make progress.

But why is decluttering regret such a struggle? Why do we feel this way in the first place?

There are a few common reasons that drive a sense of regret when it comes to decluttering our stuff. One of the biggest culprits? Thinking we’re going to need that stuff once it’s gone.

The nice china set that’s taking up space in the cupboard. The winter coat you’re holding onto even though you moved to a warmer climate years ago. The toys your kid doesn’t ever play with – but might, someday, decide he wants to revisit.

It’s too easy to come up with scenarios where we might need that stuff and convince ourselves that getting rid of it is a bad idea.

But that isn’t the only reason we experience decluttering regret. Some of us hate the idea of “throwing away money” and feel guilty parting with items we spent our hard-earned cash on.

Others worry they’ll miss whatever it is they’ve gotten rid of – an emotional connection that will be impossible to overcome. And for some? The sense of decluttering dread can seem totally irrational – with no real reason or logic you can identify that’s driving your feelings.

Either way, your feelings are valid – but they don’t have to be roadblocks.

If you’re ready to make meaningful progress and stop regretting your decision to declutter, I’ve got a few tips that can help you make it happen.

Try these strategies to ease the pain and fear associated with decluttering – and see just how much better life can be once you’ve embraced a clutter-free mentality.

1. Write down your biggest decluttering fears.

Does the thought of getting rid of all that stuff leave you paralyzed?

You definitely aren’t alone. A lot of people experience fear and anxiety at the idea of parting with stuff they’ve held onto for years.

But that fear and anxiety isn’t always rooted in logic – a concept that might be difficult to grasp when you’re in the process of actually deciding what stays and what goes.

Before you start to declutter your space, it’s a good idea to recognize the fears you have around decluttering. A great way to do this? Write them down.

Grab a journal, or open a word processor on your computer (or a notes app on your phone), and spend some time getting your worries out of your head and onto the page.

Maybe you’re scared of decluttering because you think you’re going to regret giving away your stuff for emotional, sentimental reasons.

The thought of getting rid of stuff that holds a lot of memories – mementos from your childhood, or nostalgic items passed down from your family that you’ve been holding onto for years – can be intimidating.

Maybe you’re convinced you’re going to need that thing once it’s gone – even though you haven’t touched it in years.

Or maybe it’s the idea of “wasting” all of the money you spent on stuff, even though it isn’t actually serving you right now.

By writing down your decluttering fears and understanding the reasons you’ve been holding onto your clutter, you’ll be able to analyze them with a clearer mind – and find ways to overcome them.

Once you’ve pinned down exactly what decluttering fears are holding you back, it’s time to get logical. Think about the reasons you’re hesitant to get rid of your stuff – and identify a practical solution to those problems.

Let’s say one of your biggest decluttering fears is getting rid of something you actually need someday. It could be a random cable or cord that’s been living in your junk drawer for years, a cookbook you haven’t touched in ages, or a sweater that’s been collecting dust in your closet.

Play out a few scenarios in your head and create a solution for them. What if you need that cable? You might be able to get another one via your Buy Nothing group or ask a friend to borrow one.

The recipe from that cookbook? Take pictures or write down your favorite ones before saying goodbye – and know you can always search for recipes online when you’re unsure what to do.

That sweater? Do you really need it now or do you have something else that can work instead? Odds are low that you’ll actually need it if you truly haven’t worn it in years.

Another common decluttering fear involves getting rid of items that hold sentimental value. Many of us have inherited stuff from family members who either no longer wanted it or have passed on.

It’s easy to associate that physical stuff with their memories, and your family’s history – but there are other ways to capture those sentiments without cluttering up your space. Record videos of yourself explaining the history behind certain items. Take photos and organize them into albums.

And recognize the fact that you don’t have to get rid of absolutely everything. There are some things that can’t be replaced, and it’s totally fine to hold onto those.

3. Recognize the benefits of decluttering.

Another tactic that might help you move past your decluttering fears?

Recognize all of the benefits that will come from decluttering and organizing your space.

There are so many positive things that result from clearing out your clutter – both physical and mental.

Physically, all that clutter is likely gathering dust – which can irritate your allergies and make minor illnesses, like the common cold, feel worse than they are. And if dust isn’t a problem? Think of all the energy you have to expend to keep all that stuff dusted and clean.

Mentally, you’ll be able to think more clearly when you aren’t constantly distracted and overwhelmed by the clutter in your space.

Getting rid of clutter will make it easier to focus, get lost in creative projects, and help you feel more productive. And if your clutter is causing anxiety? Living more simply can help improve that as well.

Letting go of excess stuff can also save you time and money because you know what you have and can easily access it. That helps prevent buying duplicates as you’re more aware of what you already have on hand.

Having more breathing room and additional space can help you to feel more comfortable and relaxed in your home.

Keeping all of the benefits of decluttering at the forefront of your mind can help you to work through some of the challenges you may face during the process including the fear of regret.

4. Be honest with yourself.

Don’t go overboard with decluttering. Take a slow methodical approach to simplify your space and make sure you’re in a good mindset to work on it. Rage purging when you’re angry and/or grieving is more likely to land you in decluttering regret.

Ask yourself clarifying decluttering questions as you determine what stays and what goes. As you continue with the process you’ll gain confidence in the decisions you make.

Be realistic about what items you truly use and love and be willing to let go of the ones you don’t.

If you happened to have experienced Murphy’s law in the past and did regret getting rid of something, don’t let that deter you going forward.

The reality is you probably managed just fine without it. Don’t let that dictate how you look at everything from here on out.

If you do declutter something you want later, see if there is something else you can use in its place. Consider it an opportunity to use creative problem-solving and learn to make do with what you have.

Don’t let fear keep you holding onto everything worrying about the possibility of regret. Be honest with yourself and be willing to let go in order to reach your goals in your home.

Instead of thinking about the potential of decluttering regret, focus on what you’ll gain in having less to clean and manage. Creating a simplified space may not be easy every step of the way, but the benefits are more than worth it.

How did you get over the fear of decluttering regret? Leave a comment and let me know!

Sign up on the form below to get weekly decluttering tips sent straight to your inbox. You’ll also get the free Your Home Decluttered Jumpstart which includes 100 easy items to declutter and 12 high-impact areas to declutter in 10 minutes.