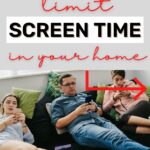 Inside: Learn how to limit screen time in your home for all family members. Use these tips to be intentional with your devices.

If you’re a parent, and your kid’s old enough to hold their own iPad or smartphone, there’s a good chance you know the struggles of managing your little one’s screen time.

Too much screen time can come with quite a few negative consequences, which is why it’s important to limit screen time in your home. But actually making your kids put down their technology and engage with the world is often easier said than done.

Fortunately, limiting screen time doesn’t have to be a huge struggle. By setting smart rules at home, making in-person connections a priority, and using apps that limit screen time, you can more easily manage the amount of time your kids spend using screens.

What Is Too Much Screen Time?

One question many parents ask is, “How much screen time is TOO much?”

There’s no one-size-fits-all answer here. For some kids, even a small amount of screen time can lead to not-so-desirable outcomes.

Other kids can more easily balance time spent in front of screens and time spent engaging with the world. Some can even self-regulate, although they tend to be the exception rather than the rule.

That’s why it’s important to look for red flags – bad behaviors that signal too much screen time and, in some cases, device addiction.

Device addiction is more common than you might think. Thanks to our smartphones, tablets, laptops, and other devices, we have all of the information in the world at our fingertips – plus games, videos, and endless distractions.

How Screen Time Is Harmful

Setting healthy limits for screen time is an important step in keeping your – and your child’s – relationship with technology healthy.

Without those limits, you could become “married to your device” which can lead to some pretty unhealthy consequences, like…

Breakdown of Family, and Face To Face, Social Interactions

Maintaining relationships with family and friends is important to our mental wellbeing – but those relationships are hard to maintain when you’re way more focused on what’s happening on your phone than the conversation you’re having.

Too much screen time can lead to a breakdown of face-to-face social interactions, which can sour relationships and lead to unneeded stress.

Spending too much time on a mobile device can also lead to increased stress – specifically around managing realistic expectations against those around you.

It’s easy to scroll through Instagram or Facebook and feel bad about yourself after you see so many pictures of people looking perfect. Before you know it, you’re comparing yourself with others and feeling less content with what you have.

It can lead to a serious case of FOMO – fear of missing out. Suddenly your ‘average’ life doesn’t seem so great compared to what you’re seeing online.

Screen Time Can Cause Moderate to Severe Depression

Too much screen time can even lead to serious problems like depression. A 2018 study “found that teens who clock in more than one hour of screen time a day, are more likely to develop mental illnesses such as depression and anxiety.”

Setting healthy limits on screen time can be a great way to combat this.

Screen time isn’t just associated with psychological side effects. You can also experience unwanted physical side effects from spending too much time staring at cell phones and other screens.

Blue light glasses have become popular in recent years as a way to filter out blue light emitted from technology throughout our day. This blue light can inhibit melatonin production, which can make it much more difficult for you to fall asleep at night.

Performing the same movements while using a computer, tablet, or phone can be an easy way to incur a repetitive stress injury.

Using a mouse, typing on a keyboard, or holding your hands in the same position as you tap away on your mobile device can all cause unusual strain on your body and could potentially lead to an actual injury.

Spending all day staring at screens isn’t great for your vision. Limiting screen time can be a good way to preserve the health of your eyes by giving them a break!

Read a book, get outside, or take a nap to get a little relief.

Have you ever grabbed a quick snack while watching television – only to find you ate WAY more than you wanted to? When you’re mindlessly eating, it’s easy to overeat, because it’s difficult to truly feel satiated by food when you’re unconsciously eating it.

Not only does screen time encourage you to eat more, it’s also often associated with less physical activity. After all, you can’t really exercise while focusing on your cell phone or watching something on your tablet.

The sedentary lifestyle screen time encourages can lead to unwanted weight gain – which has a negative impact on your health.

“Monkey See-Monkey Do,” Healthy Device Use Starts With You!

If you’re tired of struggling with your kids to manage screen time, it’s time to make some changes. There are definitely things you can do to limit and control screen time in your home.

However, the best place to start is with yourself. Are you leading by example?

If you’re checking your cell phone during dinner, spending hours on your iPad on the weekend, and are ignoring conversations for the sake of screen time, it’s time to change your own habits.

But if you’re already doing the right things? Here are a few steps you can take:

When in Doubt, Delay Devices

The best way to make sure screen time isn’t a problem?

Don’t introduce your kiddos to screens. There are good reasons that some of the biggest tech moguls didn’t allow their own kids to use the products they helped create.

When you delay giving them their own device or letting them watch too much television, you can avoid the struggle. By waiting until an age where you can more clearly set rules and establish boundaries, you’ll give yourself better control over the situation.

It’s much easier to delay than to take devices away after kids have gotten used to having them.

Another great way to manage screen time is to set some good boundaries. Your phone or tablet shouldn’t go everywhere with you.

By making places like the dinner table and the bedroom off-limits, you can create some structure and some limits around screen time.

Another good boundary to set? Determine a “shut off time” for devices in your home. No more screens after dinner can be a good way to set healthy limits.

There’s an App for That

Have you ever picked up your phone just to check something only to find yourself down some rabbit trail on social media an hour later? Most of us have been there.

To be more intentional with how you use your time on your phone, you can set up apps that will track your time as well as shut you out of other apps after you use up the time you’ve designated.

They are a great way to create a greater awareness of how you are using your phone and to build in some limits to help you regain more control over your time.

Another option is to take off certain social media apps (or any others) that have become a big time suck for you. Not being able to easily access them on your phone will give you more freedom from them and help you get more time back.

Another good behavior to demonstrate smart screen use?

If you’re in a social situation, you should be focused on the people you’re with and the conversation that’s happening – not your cell phone. As you model being intentional with your relationships, your kids will take notice.

Teach your kids this lesson early and you’ll instill good behaviors in them from the start!

Our Kids Aren’t The Only Ones Who Benefit From Less Screen Time!

More and more often, we see people buried in their cell phones – instead of engaging with the world around them. Minimizing screen time is not just a great way to strengthen family bonds and reinforce the importance of face-to-face friendships, but it will also lead to a healthier mind and body.

Take some steps to limit screen time in your home today and you’ll be amazed to see how much things can change for the better!

Sign up on the form below to get weekly tips on simplifying and living more intentionally sent straight to your inbox! You’ll also get the free Priorities Assessment that will help you to review your schedule and create more margin in your life.