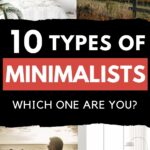 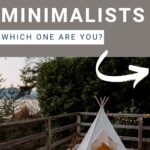 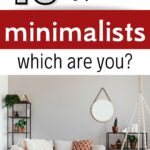 When you hear the word ‘minimalist’, what do you think of? The reality is minimalism looks very different from person to person. Today I want to talk about the 10 types of minimalists I’ve seen and you can decide which one(s) you are (or aren’t).

People don’t fit neatly into boxes so while I will be talking about 10 types of minimalists often people will have overlap between multiple characterizations. You also may feel none of them exactly fits you, which is fine too.

The 10 Types of Minimalists

Minimalist is sometimes used to describe architecture or décor. It’s very minimal and simple to the point that others may feel it appears sparse or barren.

Aesthetic minimalists adopt this look in their home and they have a strong preference for very minimal visual clutter.

The eco minimalist is focused on sustainability. They are concerned about the eco system and really don’t like waste.

An eco minimalist looks for items that are organic, fair trade, ethical, sustainable, and/or green. They care a lot about how things are made and their impact on the environment.

They recycle everything possible and may do things like composting in an effort to reduce their carbon footprint. Eco minimalists buy items second-hand and make sure to responsibly donate what they’re no longer using.

At an extreme, an eco minimalist may attempt to work towards a zero waste lifestyle.

The boho minimalist enjoys having less but also wants to incorporate earthy elements in their home. They have a unique style that includes things like macrame, florals, and wood elements.

Boho minimalists are what you’d think of as the modern-day version of the flower children of the ’70s. They have a hippy vibe and are free spirits.

Having a cozy home is important to boho minimalists, but they are selective with what they bring into their space.

An extreme minimalist knows how many items they own and they may be able to fit them all into one suitcase. They’re proud of their anti-consumer ways and hold tightly to maintaining a very simple life.

They may live in a home that is noticeably lacking typical furniture. They may use a mat on the floor instead of a couch and have a mattress but no bedframe.

The extreme minimalist focuses on their essentials and is very careful about not owning extra stuff.

The adventurous minimalist owns less in order to be freer to go on adventures. They may combine with the extreme minimalist and become a nomad traveling from place to place with their one suitcase of things.

Or they may opt to live in a van so that they can travel that way. Their focus is on being able to experience the world so they don’t want to have stuff that would tie them down or hold them back from their plans.

They see themselves as a citizen of the world and their focus in on exploring and experiencing rather than owning things.

The fancy minimalist chooses to own fewer things, but when they do buy something it tends to be top of the line. They do believe that less is more as far as quantity goes, but the quality is very important to them.

They would prefer to spend more in order to have something that lasts longer.

While minimalists are often thought of as frugal, that isn’t always the case. Fancy minimalists don’t have any issue with splurging on certain items. They just opt to own less stuff overall.

In contrast to the fancy minimalist, the frugal minimalist is very concerned with their spending. They live on a tight budget and initially may struggle with letting go of things as they adopt a simpler lifestyle.

Frugal minimalists may be upcyclers as they attempt to creatively use what they already have. They may try to sell items they no longer want rather than immediately donating.

Frugal minimalists avoid shopping as much as they can and hunt for deals on necessary items. Their goal is to have what they need and will use but they are ok with buying in bulk if that will save them more money.

The frugal minimalist works to balance saving money and being practical while also not accumulating excess.

The homesteading minimalist may be working towards living off-grid and furthering their self-reliance. They will have more stuff than some of the other types of minimalists as it’s necessary for running their farm and doing their gardening.

Canning and food preservation are part of their lifestyle and as much food as possible is made from scratch. The homesteading minimalist isn’t interested in keeping up with the latest fashions or technology. They’re focused more on a back to basics simple way of living.

The moderate minimalist is on a mission to balance living with less while also being practical. They are more mainstream in their approach than some of the other types of minimalists.

They’ve adopted a version of practical minimalism where they aren’t as extreme with how they live. Moderate minimalists believe that less is more but that it’s also important to keep the things that are useful and that you enjoy in your life.

Moderate minimalists are working to balance the desire to have a home that is easy to tidy while also not wanting to be overly rigid in their mission to live simpler life.

They want to form their own path outsides of the bounds of what may be expected of a minimalist. The rebel minimalist is a nonconformist.

It’s difficult to put a characterization on this type of minimalist since by nature they don’t want to be boxed into a type. They march to the beat of their own drum and prefer to pick and choose the parts of the minimalist lifestyle that work for them and ditch the rest.

That’s A Lot of Types of Minimalists. What’s a Minimalist Anyway?

The dictionary definition of minimalist is a person who practices minimalism, which is described as “a style or technique that is characterized by extreme spareness and simplicity” (Webster’s dictionary).

Minimalists seek to have a life focused on what matters most and want to get rid of the things that would distract from that. Minimalists want to live intentionally and choose a simpler life to free themselves up for the values and causes that are most important to them.

Benefits of Adopting a Minimalist Lifestyle

There are various benefits to adopting a more minimalist lifestyle. Here are just a few of them.

When you have less stuff, that means less stress. It’s less effort to keep your house picked up and less difficult to move.

Studies have shown that people who have more cluttered spaces have heightened levels of anxiety. Choosing to live more minimally creates a more relaxed environment.

The excess stuff in life can easily become a distraction. Whether it is the clutter in your home or your schedule, it takes up your time and energy.

When you simplify, you free yourself up to focus more on your goals and priorities.

Minimalists do their best to opt-out of the consumer mentality.

They choose to live more simply and be more intentional with how they shop. Minimalists don’t try to keep up with the latest trends and save money by choosing to live a simpler life.

How to Get Started with Minimalism in 4 Actionable Steps

Want to start on your own minimalist journey? Here are four steps to get you started.

1. Think about what is most important to you

Consider what’s most important to you.

What current life stage are you in? What are your priorities? Carefully consider your answers. It’s important to live in alignment with what you value most.

2. Decide on your goals

Think about what your unique goals are. What does success look like in your life? Your answer doesn’t need to be the same as anyone else’s.

Spend some time reflecting on what outcomes you want. Write them down.

Once you are crystal clear on what matters most to you, it starts to become more obvious what has become a distraction from that.

Evaluate where there is currently clutter in your life. It could be in your home, schedule, or even emotions you’ve been carrying with you. Work through decluttering each area as needed.

After decluttering, reevaluate where you are. Did you reach your simplifying goals or is there more you want to let go of? What areas of your life need more attention?

Regularly check in with where you’re at to make sure you’re staying on track with your goals.

Did you identify with one or more of the types of minimalists mentioned? Or perhaps none of them resonated with you at all. You can simplify without becoming a minimalist.

If I had to choose one of the 10 types of minimalists, I’d be the rebel. However, I normally don’t call myself a minimalist as I chose to focus on the term ‘simplicity’ instead.

If minimalism feels too extreme to you, that’s fine too. The journey is about figuring out the right amount of stuff for you and you can call that whatever you want.

Want to keep up to date with The Simplicity Habit? Sign up on the form below and get weekly tips on simplifying and decluttering sent right to your inbox! You’ll also get the FREE Your Home Decluttered Jumpstart which includes 100 easy items to declutter and 12 high impact areas to declutter in 10 minutes to help you get started!